The Zoo is reopening May 21! All visitors will require free entry passes and be required to follow safety measures. Free timed-entry Asia Trail/Panda Passes are required for the giant panda viewing.

Jul. 20, 2020
Giant Panda Update: From Bamboo Shoots to Training Chutes
Summer is in full swing at the David M. Rubenstein Family Giant Panda Habitat. Read the latest update on Mei Xiang and Tian Tian from Laurie Thompson, assistant curator of giant pandas.
Jul. 02, 2020
Bringing the Zoo To You: June 2020
A family meal among prairie dogs, the soothing sounds of a cheetah’s purr and a Pride cake fit for a giant panda. As summer kicks off at the Smithsonian’s National Zoo and Conservation Biology...
Jun. 05, 2020
Bringing the Zoo to You: May 2020
Behold a brunch between a sloth and a golden lion tamarin, catch a close-up of newborn black-footed ferret kits and get a glimpse of giant pandas gorging themselves on bamboo shoots. All of these...
May. 15, 2020
Melodious Munches: Pandas and Bamboo Shoots
It's bamboo shoot season, and the Zoo's giant pandas and red pandas are indulging in their favorite food!

Mar. 10, 2020
Learning More About Panda Health One Drop of Blood at a Time
You may not like needles or giving blood when you go to the doctor’s office, but did you know that blood is an important diagnostic tool for veterinarians? When an animal is feeling sick, obtaining a...
Feb. 28, 2020
Your Go-to Guide for a Winter Day at the Zoo
Add a little sunshine to a gray winter day with a trip to the Smithsonian’s National Zoo. There’s still plenty to see from December through March. This guide will help you plan for a cold-weather...

Jan. 14, 2020
Pandas Frolicking in Winter
Mei Xiang and Tian Tian have been having some adventures around the David M. Rubenstein Family Giant Panda Habitat!
Dec. 26, 2019
2019’s Conservation Stories Worth Celebrating (Part One)
As the year winds down, we’re reflecting on some of our biggest conservation success stories of 2019. 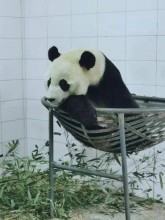 Nov. 27, 2019
Bei Bei Has Settled in at Bifengxia and the Panda Team is Back!
Bei Bei is settling in at his new home in China at the Bifengxia panda base. He did very well on the FedEx Panda Express and spent most of the 16-hour trip eating and sleeping.

Nov. 19, 2019
Giant Panda Bei Bei Departs Smithsonian’s National Zoo for China
Bei Bei the 4-year-old giant panda, began his journey to China on Nov. 19, 2019.
Nov. 08, 2019
Snapshot: Bei Bei in Pictures
Giant panda Bei Bei knows how to work his angles! Check out some of our favorite snaps of this remarkably photogenic bear from the past four years.
Nov. 08, 2019
Bei Bei’s Most Memorable Moments at the Zoo
As we prepare to bid giant panda Bei Bei a fond farewell, we’re taking a look back at some favorite milestones and memorable moments from his time at the Zoo.
Nov. 08, 2019
A Day in the Life of a Giant Panda Keeper
Follow a day in the life of the Smithsonian's National Zoo's giant panda keepers as they care for Tian Tian, Mei Xiang and Bei Bei.