The Zoo is reopening May 21! All visitors will require free entry passes and be required to follow safety measures. Free timed-entry Asia Trail/Panda Passes are required for the giant panda viewing.

Sep. 11, 2019
Giant Panda Mei Xiang Is Not Pregnant
Reproductive scientists, veterinarians and animal keepers at the Smithsonian’s National Zoo and Conservation Biology Institute have determined that giant panda Mei Xiang (may-SHONG) will not give...

Aug. 20, 2019
Bei Bei is Turning Four!
By the end of August Bei Bei will be another year older! He will receive a panda-friendly frozen cake specially made by the Zoo’s Department of Nutrition Science to celebrate during the morning of...

Aug. 07, 2019
Mei Xiang is Showing Behavioral Changes
Scientists, veterinarians and keepers have been monitoring Mei Xiang closely for the past several months to determine if she is pregnant or experiencing a pseudopregnancy.

Jul. 17, 2019
Bei Bei is Recovering From A Bout With Mucous Stools
During the past several weeks, Bei Bei has been experiencing some gastrointestinal discomfort which has caused him to pass several mucous stools and loose stools.

Jul. 12, 2019
Mei Xiang Update: July 2019
Keepers are still waiting to find out if giant panda Mei Xiang is pregnant. She has not started exhibiting many behaviors associated with the secondary hormone rise of a pregnancy or pseudopregnancy.
Jun. 28, 2019
The Zoopendous Summer Interns’ Guide to D.C.
Make the most of your time out of the office with a visit to the Smithsonian’s National Zoo! 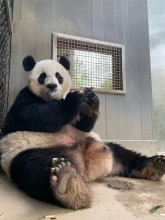 May. 20, 2019
Panda Breeding Season Has Faded to a Calm Spring
Roughly a month and a half after Mei Xiang’s artificial insemination, things at the David M. Rubenstein Family Giant Panda Habitat are settling into their regular routine.

Mar. 21, 2019
Mei Xiang Showing Signs of Estrus
On March 15, Mei Xiang started exhibiting behavioral signs that breeding season is approaching!
Mar. 01, 2019
8 Historic Photos of the Zoo to Celebrate Its 130th Anniversary
The Smithsonian’s National Zoo was created in 1889 and opened its doors in 1891. To celebrate its 130th anniversary, look back at how the Zoo has evolved through the years.

Feb. 14, 2019
Come to the Giant Panda Housewarming Party
You’re invited to a housewarming celebration! The new visitor interpretive exhibit in the panda house is finished and we would love for everyone to come visit and see it.

Feb. 14, 2019
Public Invited to Giant Panda Housewarming Celebration
The Smithsonian’s National Zoo and the Embassy of the People’s Republic of China will host a housewarming, sponsored by Airbnb, to celebrate the new exhibit for visitors inside the panda house. 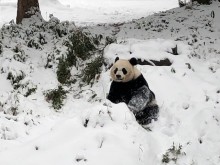 Jan. 30, 2019
Catching Up With the Pandas
The shutdown didn’t shutdown giant panda playtime! During the past three-and-a-half weeks Tian Tian, Mei Xiang and Bei Bei have carried on with their daily routines.

Dec. 21, 2018
Giant Panda Activity Discovered in Bamboo Restoration Plots
If you plant it, they will come. A collaborative research team including scientists from the Smithsonian Conservation Biology Institute, Guanyinshan Nature Reserve and Tsinghua University has...

Nov. 30, 2018
The Panda House is Getting a Makeover
The New Year will bring in some new changes to the panda house. Beginning Dec. 5, the panda house at the David M. Rubenstein Family Giant Panda Habitat may occasionally close during weekday mornings...
Nov. 16, 2018
Bei Bei Plays in the Snow
Three-year-old giant panda played and tumbled in the snow Thursday, Nov. 15.