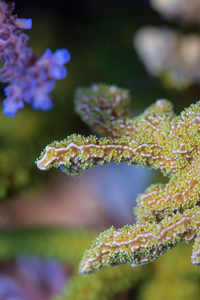 Coral reefs around the world are being impacted at an alarming rate. Globally, coral reefs face rising ocean temperatures and resulting ocean acidification. Locally, reefs face many other threats from tourism to building runoff, further compounding their degradation.

In the very near future, many coral reefs may cease to exist.  Human life depends largely on the health of our world’s coral reefs. Coral reefs help protect our shorelines and are critical in the carbon cycle of our planet. While they cover only about 0.2 percent of the Earth’s surface, coral reefs are home to over 25 percent of the life in the oceans, providing nursery grounds for many of the fish that people consume.  Over a billion people depend directly on reefs for their livelihood. Coral reefs contribute over 30 billion dollars to the world economy each year.

Nowhere is this important link between the reef and human livelihood more recognized than in Australia with their connection to the Great Barrier Reef. Tourism linked to the reef, on its own, is an industry valued at more than $6 billion annually. Global and local threats are taking their toll on Australia’s Great Barrier Reef and because of this the Hagedorn Laboratory has begun a collaboration between the Smithsonian as well as scientists at the Taronga Conservation Society Australia, Monash University, and the Australian Institute of Marine Science. Our team, the Reef Recovery Initiative, began work in 2011 at the Australian Institute of Marine Science to begin to develop cryopreservation techniques for the creation of a frozen Genome Resource Bank for the Great Barrier Reef.

In November of 2012, Dr. Mary Hagedorn and I traveled again to the Australian Institute of Marine Science to work on corals during their annual spawning event where we set up our “coral fertility clinic.” Coral only spawn once a year, so timing and efficiency are crucial. On our way, in Sydney, we met up with Dr. Rebecca Spindler from the Taronga Conservation Society Australia as well as her assistant Joanna Wiszniewski. They travelled with us to Townsville where we were also joined by Smithsonian National Zoo aquarist Mike Henley. Hauling four dry shippers, containers that would store our frozen samples at the end of the trip, keeping them safe at liquid nitrogen temperatures for their travel to Taronga’s Western Plains Zoo in Dubbo, as well as enough lab equipment to run our coral fertility clinic, we made the trek up to the Australian Institute of Marine Science. At the Australian Institute of Marine Science we joined up with our host, Dr. Madeleine van Oppen.

As we set up our lab at the Australian Institute of Marine Science, large adult coral fragments were brought in from the reef by Australian Institute of Marine Science researchers. Over the next several nights, each coral fragment was placed into its own individual container around 6 or 7 p.m. in anticipation of spawning to prevent fertilization of eggs, so that we could use them for our experiments and have sperm separated for each colony. Spawning would begin around 9 p.m. and continue until almost 11 p.m..

During spawning, we collected egg and sperm bundles using red lights. Corals use moonlight as a cue for spawning timing, but they are unable to detect red light. By using red lights, we can work without affecting their spawning. Most of the corals on the Great Barrier Reef spawn by releasing small packets of egg/sperm bundles. You can imagine eggs like a little bundle of grapes surrounding a small packet of sperm. These bundles float to the surface of the ocean where they must break apart and find eggs or sperm from another colony to fertilize, as they usually do not self fertilize. With our fragments in tanks, we are able to easily collect these bundles from the surface of the water. 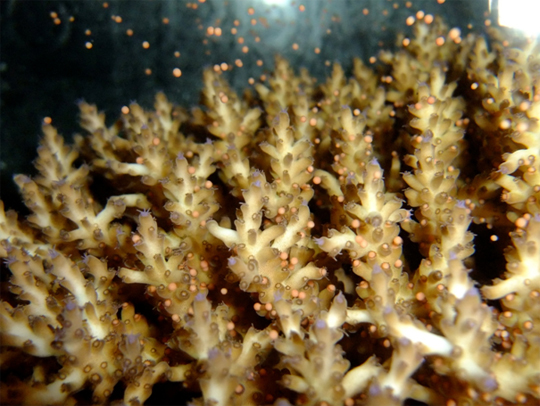 Acropora loripes spawning in a tank at the Australian Institute of Marine Science. Sperm and embryonic cells from this species were placed into our Australian frozen Genome Resource Bank. Photo by M. Henley.

Once we collected from all spawning fragments we took our bundles to the lab, separated out the eggs and sperm and, cleaned them all up. We keep eggs for fertilization experiments and embryo production.

We assessed sperm just as it would be assessed in a human fertility clinic. For each colony that spawned we determined sperm motility, which is critical for optimal fertilization, as well as sperm concentration, so that we can freeze sperm at concentrations that will yield good fertilization rates. Colonies whose sperm was not motile enough, or whose densities were too low, were not placed into our banks.

Once assessed, we froze the sperm using a field-friendly cryo-box that Dr. Hagedorn and I developed. This box allows us to freeze at predetermined rates, easily and economically in the field. Once frozen, we put the sperm samples into our dry shippers for safekeeping until the end of the trip. We removed and thawed a few samples so that we could assess their post-thaw motility and fertilization success, ensuring that our banked samples will be viable and have good success in the future.

Dr. Hagedorn and I trained Dr. Emily Howells on how to cryopreserve coral sperm, and she assisted with our experiments. Emily and Dr. David Abrego assisted us with the creation of embryos, some from fresh sperm and some from sperm that we cryopreserved.

We conducted other experiments looking at the basic reproductive biology of the coral species. Mike Henley and Rebecca Spindler examined sperm for individual polyps of different colonies, looking at sperm density per bundle as well as the motility over time.

We also made embryos with fresh eggs and sperm each night so that we could freeze embryonic cells from each species that we worked on. We allowed the embryos to develop to the eight-cell stage, which put us working until around 6 a.m. each night. At that time, we homogenized the embryos and froze the resulting slurry of cells, using “Mr. Frosty” containers in a -80°C freezer, allowing us to freeze at a very slow rate. The resulting frozen samples contain embryonic stem cells that can one day be used to grow coral larvae. After freezing, we placed the embryonic cells samples into the bank, with a few samples being removed and assessed on a flow cytometer to ensure that they were alive post-thaw.

We continued these experiments every night for almost a week. It was a long, hot trip filled with very late nights and lots of work, but it was worth every moment. We added five species to the bank, including:

In addition, we successfully created coral larvae from our frozen sperm samples. We gave these larvae substrate and allowed them to settle and begin their growth into adult colonies, proving that our samples will be of use when needed in the future.

At the end of the trip, NZP’s Mike Henley stayed a few days to watch larval settlement, while Rebecca Spindler and I carried our four full dry shippers back to the Taronga Conservation Society in Sydney, where they would await travel to Taronga’s Western Plains Zoo, several hours north in Dubbo where they will stay indefinitely.