Skip to main content
× VISITORS: In an effort to prevent the spread of COVID-19, face coverings are strongly recommended for guests, ages two and older. Social distancing is also encouraged.

Calling all middle, high school and college students! Conservation Discovery Day is going virtual this year. Interested in a career in science, wildlife biology, animal care and sustainability? Find out how you can make a difference for wildlife.

Virtual Conservation Discovery Day is free to attend online. Registration is not required. All students and parents are welcome.

Before the live Q&As, watch a series of videos about conservation career paths, science and research, field work and more. View the full playlist, or choose a topic below.

Join live Q&A sessions with researchers and scientists on Friday, Oct. 2, from 10 a.m. to 3 p.m. EST. See the schedule for each live Q&A room below.

A Walk on the Wild Side: Veterinary Care of the Strange and Beautiful

At the Heart (Rhythm) of Wildlife Care and Conservation

So You Want to Be a Conservation Biologist? Come See How We Came to Work in Animal Conservation

Learn About the Global Health Program

Life of a Tree: Discover Dendrochronology

Choose a topic to watch:

Researchers track curlews that breed in the grasslands of Easter Montana to learn what resources are important to the shorebirds as they raise their young and migrate 1,500 miles south to wintering grounds in Mexico.

All About Kiwi | Kathy Brader and Wes Bailey

Learn about kiwi from the keepers who care for them, and get a behind-the-scenes look at SCBI.

See how conservation biologist Brian Gratwicke uses acoustic sound monitoring and photo ID tools to learn about amphibians in his own backyard. Learn about digital vouchers, what they mean for your own neighborhood citizen science projects and how they can be applied to solving global conservation problems.

A Walk on the Wild Side: Veterinary Care of the Strange and Beautiful| Kelly Helmick

Get an introduction to career options in endangered species medicine, and learn about some of the skills and activities required of the veterinary care team at SCBI.

A Walk on the Wild Side

SCBI is home to 34 cranes, allowing veterinary staff to develop a deeper understanding of the physiology of these animals while in human care. Blood gas monitoring is important both under anesthesia and while animals are going through stressful events, such as long migrations.

Training the Next Generation of Conservationists| Jim McNeil, Robert Barrett

Learn about the Smithsonian-Mason School of Conservation (SMSC), a partnership between the Smithsonian and George Mason University with a mission to develop leaders in biodiversity conservation through innovative education, training and research. The school is based at the SCBI in Front Royal, Virginia, and offers a range of education and training programming throughout the year.

Get a glimpse into a field expedition as Smithsonian scientists work with local partners to document the mammals, birds, amphibians and reptiles of a proposed national park in Southeast Asia.

Go behind the scenes at the Zoo's conservation genomics laboratory, and learn how scientists get DNA from sample to sequence using the lab's equipment.

SCBI is home to one of the 71 forest research sites that make up the Forest Global Earth Observatory (ForestGEO). Here, researchers monitor trees to understand tree growth and how it may be impacted by climate change. Learn about forest ecology, dendrometer bands, data analysis and the process of science.

So You Want to Be a Conservation Biologist?

Wondering how you can have a career in animal conservation? Meet research scientists, keepers and curators, and learn about the diverse paths they took to have successful careers in conservation:

For three years, wildlife biologist Bill McShea has been part of a team deploying camera traps throughout D.C. to estimate the number of feral cats in the city. The team is also recording other wildlife that shares the city with humans and their pets. Learn all about the project and how researchers set up camera traps.

At the Heart (Rhythm) of Wildlife Care and Conservation| Rosana Moraes, Megan Horning

After a successful pilot of using heart rate monitors in maned wolves and scimitar-horned oryx, scientists are ready to provide continuous, long-term heart monitoring. It could help them understand how animals respond to changes in their environment in ways that may not always be revealed by observable behaviors.

Have you ever wondered what a dog egg looks like? Or how SCBI researchers collect them when a genetically valuable female canid (like a wolf, fox or dog) dies? Take a look “under the microscope” to see these specialized cells, and learn how researchers collect, preserve and grow them for canid conservation.

Scientists working with the Smithsonian's cryo-collections have the COOLest job! Find out what cryopreservation is and how it's saving species. Learn what scientists freeze (and why), and how they reanimate living cells.

Bison play a key role in maintaining healthy grasslands. By moving across the landscape, grazing and wallowing, they create unique conditions that support other grassland species. Tens of millions of American bison once shaped the great plains but were brought to the brink of extinction during the 1800s. Restoring large herds of free-roaming bison is critical to the conservation and biodiversity of America's prairies. Find out how SCBI scientists are tracking the movements of reintroduced bison, and what they have already learned.

Just outside of Shenandoah National Park, SCBI researchers analyze tree growth and complete an annual mortality census to unlock the mysteries of the forest. The large forest dynamics plot they study is part of the ForestGEO network, with 71 sites in 27 countries all over the world. Join research biologists to learn about tree coring, data analysis and the scientific process.

Life of a Tree

SCBI's Global Health Program works to train the next generation of wildlife conservationists, investigate emerging infectious diseases that threaten wildlife and human public health, promote One Health awareness at the intersection of animal and human communities, and improve the health of wildlife species worldwide. Learn more in these videos about their work: 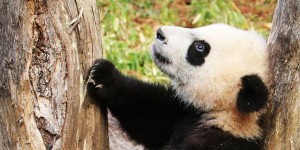 A Panda Story
Philanthropist David M. Rubenstein, a longtime supporter of the giant panda program at the Smithsonian's National Zoo and Conservation Biology Institute, joins Brandie Smith, the Zoo's director, to discuss the history of giant panda care and what might be next for Xiao Qi Ji, Mei Xiang, Tian Tian.

A Panda Story
Philanthropist David M. Rubenstein, a longtime supporter of the giant panda program at the Smithsonian's National Zoo and Conservation Biology Institute, joins Brandie Smith, the Zoo's director, to discuss the history of giant panda care and what might be next for Xiao Qi Ji, Mei Xiang, Tian Tian.