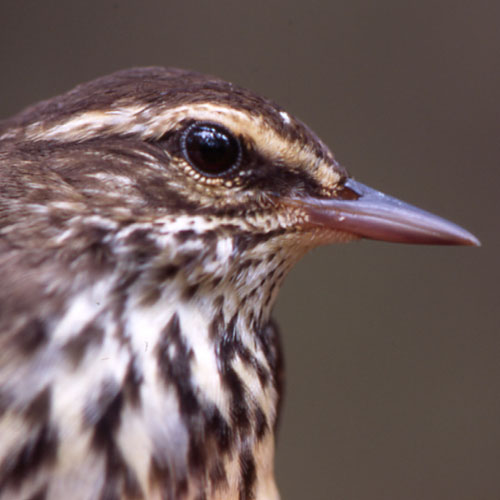 The northern waterthrush (Parkesia noveboracensis) is a swamp thing, a seeker of wet woodlands far from where most people go. Summers are spent amid the swamps and sluggish rivers of the far north's forests, with beavers, moose, and bears for neighbors. In winter, they head south to tropical swamps, trading northern conifers for southern mangroves. The thrushes get a whole new set of neighbors including boa constrictors, manatees, iguanas, and fish-eating bats.

Although it's a type of warbler, the northern waterthrush looks like a thrush, with a spot-dappled white belly and brown feathers on the head, back, wings, and tail (males and females look alike). It also acts like a thrush, spending most of its time on the ground. These birds walk about, with a constantly bobbing tail, foraging for insects and other invertebrates, tossing leaves aside with their bills to check for the prey underneath them.

In April or May, northern waterthrushes arrive on the breeding grounds, which range from Alaska to Newfoundland, dipping into parts of the northern United States. Males establish territories, form pairs and then build nests of moss, grass, and animal hair in dry sheltered places on the ground or among the roots of overturned trees. Females lay about four eggs and incubate them for two weeks. Once the eggs hatch, both parents feed the nestlings incessantly. The young grow quickly and nine days after hatching they are ready to leave the nest. Even so, they are still dependent on their parents for food for several weeks.

Raising young is not easy and many things can go wrong. Bad weather can destroy a nest. Many forest creatures relish its contents: other birds, weasels, even deer and mice have been known to eat northern waterthrush eggs or young. Time allowing, pairs can deal with setbacks of weather and predation and build a new nest to replace one that was lost. But by late July or early August their journey south must begin.

Most people in the United States see northern waterthrushes at this time, when they are migrating. Look for them in the wettest parts of suburban back yards and city parks. But they won't be there long: waterthrushes have a tight schedule to follow. In spring they are in a rush to get to the best territories early enough to have plenty of time to raise young. In fall, they can't linger either, as they are bound for places as far south as Venezuela.

If a waterthrush is lucky, it might live through six or more round-trip migrations (the oldest known waterthrush lived for nine years). Like many migratory birds, they come back to the same spots, north and south, year after year. We know this because in the 1960s a man named Paul Schwartz, who lived in Caracas, Venezuela, suspected that the same individual migratory songbirds were returning to the same exact places each winter. 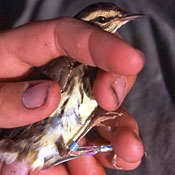 To prove this, he began to capture northern waterthrush living in a botanical garden in the city near his office. He put colored leg bands on them so he could identify individuals with his binoculars. He captured every bird that came to stay in the garden and studied them winter after winter. He confirmed that they were indeed site faithful, each bird doing its best to return to the garden after a summer in the north.

He also determined that they were territorial. Each bird defends and uses an exclusive area, although they call a truce every evening to take baths at communal water holes. All of Schwartz's looking into and learning of their daily habits added up to one of the first in-depth studies of a migratory songbird on its wintering grounds.

Schwartz had a special place in his heart for 'Bird #71.' Bird 71 was the oldest of all the birds he studied and the hardest to catch. She came back to his study site six times, once even after Schwartz put her in a paper bag, drove her 300 kilometers (186 miles) away, and released her in a forest. She found her way back in no time, as did the other older waterthrushes he tried this on. But the younger ones, those spending their first season in Venezuela, stayed in the strange places where they were released. Bird 71 was also featured in a color photo in a Living Bird magazine article by Schwartz. It was an embarrassing shot: she was trying to take her nightly bath in her usual spot even though the water that fed her little pool was turned off. She went through the usual bathing motions in the dry hole anyway and was captured on film by Schwartz from a photo blind. Bathwater or no bathwater, a waterthrush sticks to its routine.

But can the northern waterthrush keep to its routines in the face of human impacts on the habitats it uses? We know that mangroves—its primary winter habitat—are under threat from development, logging, and conversion to fish farms. These trees are key to the survival of a whole range of birds, reptiles, and mammals. They are important nursery grounds for many fish species, and they also keep water clean by filtering sediment and pollutant runoff and protect the coast from erosion due to storms. We can't plant mangroves in other places—they grow only near coastal areas, the same areas of highest density of human population today.

Winter Ecology in Jamaica
Every winter, Smithsonian scientists head to Jamaica to see how North America's migratory birds fare during their nonbreeding season.