Cheetah Conservation Station keepers at Smithsonian’s National Zoo are celebrating the arrival of a male lesser kudu calf, who was born Mar. 29 to 7-year-old mother Rogue and 10-year-old father Garrett. When keepers arrived onsite Mar. 29, they discovered Rogue had given birth overnight. Later that day, Zoo veterinarians conducted a brief exam of the newborn and found him to be healthy and strong. He is the third calf for both parents; older brothers Kushukuru and Toba were born in January and October 2019, respectively.

Animal care staff are allowing Rogue and her calf to bond in a quiet enclosure behind the scenes. Toba was present for the birth and continues to spend evenings with his mother and younger brother. Garret and Kushukuru can see, hear and smell the calf through a mesh “howdy” window behind the scenes. Keepers note that Garret is a calm influence and a great role model for his sons. They are excited to see how this new calf will learn from his father and brothers.

Rogue arrived at the Zoo in October 2016 from the St. Louis Zoo in Missouri, per a recommendation to breed with Garrett. Most of the Zoo’s animals participate in the Association of Zoos and Aquariums’ Species Survival Plan (SSP). The SSP scientists determine which animals to breed by considering their genetic makeup, nutritional and social needs, temperament and overall health.

Native to arid and semi-arid areas of northeastern Africa, including parts of Ethiopia, Somalia, Kenya, Sudan, Uganda and Tanzania, lesser kudu are listed as near threatened by the International Union for Conservation of Nature. Lesser kudu number about 100,000 in the wild, but the population is decreasing due to habitat loss from human and livestock expansion, hunting and disease.

As a public health precaution due to COVID-19, the Smithsonian’s National Zoo and Conservation Biology Institute is temporarily closed to the public but will reopen May 21. As the newborn kudu acclimates to his habitat, visitors may be able to view him and his family exploring their surroundings. Starting May 14, visitors may begin reserving either free timed-entry passes or paid parking passes to enter the Zoo. In the coming weeks, the Zoo’s website will be updated with information regarding pass reservations, enhanced safety protocols and guidelines, dining amenities, shopping and details on how to reserve an Asia Trail/Panda Pass to view giant panda cub Xiao Qi Ji. 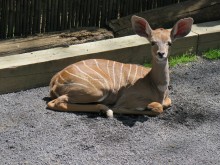