By Tony Barthel, Curator of Large Mammals at the National Zoo

This past October I was lucky enough to travel to Malaysia and join a team who was exploring opportunities for collaboration on elephant and wildlife conservation between the Smithsonian Conservation Biology Institute (SCBI), the National Zoological Park (NZP), and the Malaysian Department of Wildlife and National Parks. Our team consisted of SCBI's Peter Leimgruber, Ahimsa Campos-Arceiz, a collaborator at National University Singapore, and me. This project was particularly exciting for me because it, in part at least, had its roots in a visit to our new elephant facility.

Earlier in the year some members of the Malaysian Department of Wildlife and National Parks were in the DC area for a series of tiger conservation meetings. During that trip, they toured our new elephant facility. They were in the process of planning to revamp their elephant facilities and programs in Malaysia and were excited about what we have been doing here with ours. The visit to our facility led to discussions about a partnership which ultimately led to this trip.

For me, the whole trip came together quickly. I first heard about the opportunity in September of 2011 and by mid-October I found myself sitting on a plane preparing to spend the next few days on several extremely long flights traveling to Kuala Lumpur, Malaysia. First on the agenda in Malaysia was a meeting with an extensive team from the Malaysian Department of Wildlife and National Parks to learn about their programs and agree on some basic objectives for the visit. We planned a series of excursions to locations in peninsular Malaysia related to various wildlife department projects. These visits took us into and around Taman Negara National Park and across peninsular Malaysia.

High on our list of places to visit was the Elephant Conservation Center located in Kuala Gandah. This center was created in 1989 as the main base for Malaysia's Elephant Conservation and Translocation Unit. This group was established in the 1970s as a response unit to help mitigate the impact of increasing crop raiding by wild elephants. The idea was to capture and translocate "problem" elephants to areas further removed from agricultural interests. They do this using trained captive elephants to help calm and restrain the newly captured wild elephant and bring it to a more accessible location so that he or she can be loaded into a boat or truck and moved to the release site. The working elephants used for this program have been housed and cared for at the Elephant Conservation Center. 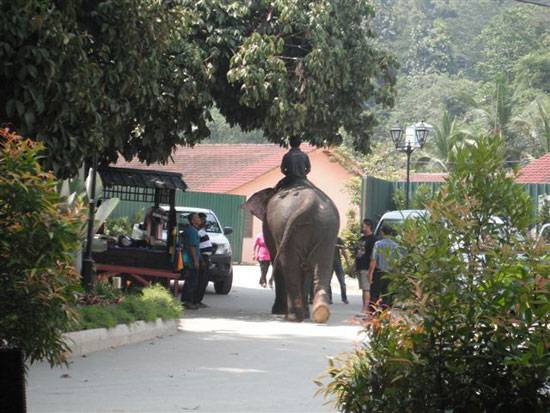 Over time this facility and its staff have taken on additional roles. Today in addition to housing the elephants used for the translocation program, this facility is also a tourist attraction, education center, and an elephant orphanage. This change was one of the things that brought me on this trip. The wildlife department is now seeking opportunities for further developing this facility and its staff with the skills needed to meet these new goals. Our experience in facility design, animal care, and public education position us well to work with the Malaysian Department of Wildlife and National Parks to help- provide training and assistance in these areas.

After visiting this facility and other animal management facilities, we went on to explore wild elephant habitat. This portion of the trip centered in and around Taman Negara National Park. This is one of the oldest and largest national parks in peninsular Malaysia and is the primary release site for translocated elephants. As a result this park is critical elephant habitat. It is also an important location for research on wild Asian elephants and the impact of the translocation program on individual elephants and the population as a whole. The forests there are incredibly dense and rivers and creeks crisscross the rugged terrain, highlighting for me the challenges associated with studying Asian elephants in the wild. You simply can't see them. An animal as large as an elephant could be just 20 feet away and you wouldn't know it! 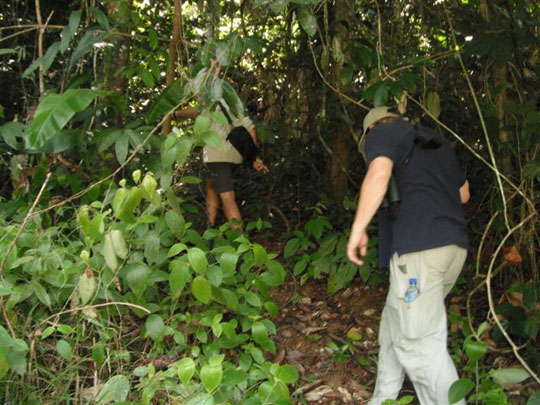 Elephant path through the forest

As a result, our scientists have had to come up with innovative methods for studying and learning about wild Asian elephants. For example, you can learn a wealth of information about an elephant or elephant populations simply by studying the feces they leave behind. Scientists can learn the relative size of an elephant, its diet, health, reproductive status, and much more, all from studying feces. For years I've spoken to zoo visitors about this exact subject, but it was still fascinating to experience this first hand. I quickly found my eyes glued to the forest floor looking for signs of recent elephant activity.

Another way scientists learn about Asian elephants is through satellite tracking. This is particularly useful because once outfitted with a satellite collar, the elephant does not need to be followed closely on foot. All of his or her movements are tracked via satellites and that data is available to the scientists remotely for analysis. This gives us valuable insights into their daily and seasonal movement habits, group dynamics, and overall use of the habitat. This would also be a valuable tool for looking into the impact and effectiveness of the elephant translocation program. It became increasingly clear that this was another exciting opportunity for ongoing research collaborations between our organizations.

In this region the primary threat to elephants seems to be conflict associated with expanding palm plantations and related habitat loss. New plantations are particularly vulnerable to damage by hungry elephants. I knew before my trip that the palm industry has a far-reaching effect on the survival of many species throughout the region, but this opportunity to see the issues first-hand was eye-opening.

Palm oil is an extremely important export product for the region. You can literally drive all day in some parts of Malaysia passing through palm plantations the entire time. This crop is a major driver in the growing Malaysian economy and is vitally important to the people living there. The primary issue is that forests are cleared so that palm plantations can be established, leading to critical habitat loss and a worsening conservation crisis for many species living in these forests, including Asian elephants. 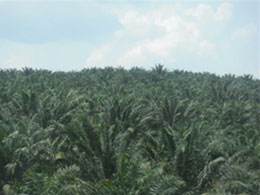 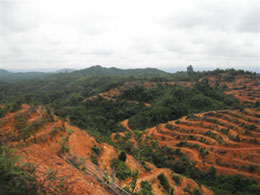 That said, some 25 percent or more of the natural forest remains in this area. This is an incredible resource and critical to regional conservation initiatives. Better understanding of elephants' use of these forests would be important for meaningful government land use projects and policies. An elephant GPS collaring program would provide invaluable information and be an important and impactful tool for conservation initiatives in Malaysia. For this reason, partnering to develop such a program was a major focus for our visit and subsequent discussions.

Following these visits we returned to Kuala Lumpur to meet again with members of the Malaysian Department of Wildlife and National Parks. We began the process of drafting formal agreements between our organizations and agreed to begin on some of the collaborative projects even before that process is finalized. In particular, plans for the development and implementation of a GPS elephant tracking project were sketched out and we worked on some initial ideas for an in-country animal care workshop to help enhance those programs.

Already one translocated elephant has been fitted with the tracking system and will be providing valuable data soon. This is a great start. Tentative plans are also underway to host a workshop in Malaysia later this year on animal care and facility design. It was truly exciting to be part of this process and fascinating to see how programs and partnerships like this are developed. I have high hopes that this will continue to grow to be an important partnership for elephant conservation in the region and am looking forward to being more involved in the future.

This story was originally published in February 2011 issue of Between the Lions, Friends of the National Zoo’s volunteer newsletter.

Asian Elephant Conservation
Asian elephants face critical threats throughout their range. Through satellite tracking and conflict management, scientists are working to save them.