A new Smokey Bear outdoor exhibit opened at Smithsonian’s National Zoo today, May 23, inviting visitors to look back in time to the mid-20th century, when a badly burned black bear cub was rescued from a devastating forest fire and placed under the Zoo’s care. Archival photographs and 14 colorful posters line the pathway in front of Smokey Bear’s former habitat, teaching visitors about his legacy as an ambassador for wildfire prevention and wildlife conservation. The entrance, located near Lemur Island, is marked by a 6-foot-tall statue of the iconic character that shares his name. This exhibit was made possible by the U.S. Department of Agriculture’s Forest Service, which is celebrating 75 years of the character’s campaign to reduce the incidences of human-caused fires.

“I can think of no one better to tell the tale of how humans and nature are inextricably linked than our very own Smokey Bear,” said Steve Monfort, John and Adrienne Mars Director of the Smithsonian’s National Zoo and Conservation Biology Institute. “His story is truly inspirational, and even though decades have passed since Smokey Bear lived here, the message of his infamous character — protecting animals and their habitats — is timeless. We hope visitors come away with a deeper understanding of the Smithsonian’s role in helping the global community protect these critical ecosystems through our forest fire ecology research."

As visitors stroll through the exhibit, they will see the rich stories of Smokey Bear the character and Smokey Bear the Zoo resident take shape. A series of colorful posters line the pathway, including a reproduction of the 1944 artwork that launched the Smokey Bear Wildfire Prevention campaign. That year, the United States began a national wildfire prevention campaign to protect forest resources during World War II. The Cooperative Forest Fire Prevention Committee chose a powerful yet friendly bear to speak for the forests. Posters show Smokey’s character through the decades, offering friendly tips on the proper way to extinguish campfires and advice on how to be a good steward of the environment. Several of the iconic Smokey posters, created by Forest Service artist Rudy Wendelin, helped shape the public identity of this beloved character.

Complementing this outdoor gallery are bilingual panels in English and Spanish highlighting the real Smokey Bear’s story and the Smithsonian Conservation Biology Institute’s (SCBI) forest ecology research. In 1950, a black bear cub was found clinging to a tree in Lincoln National Forest in New Mexico after a devastating forest fire. At the time, he was estimated to be 3 months old. The cub was dubbed “Smokey Bear,” inspired by the Smokey Bear Wildfire Prevention campaign. After receiving treatment for wounds to his paws and hind quarters, Smokey was flown to Washington, D.C., where he became one of the most famous residents in the Zoo’s 130-year history.

As the campaign grew, Smokey Bear became a star and a must-see animal at the Zoo. Children sent the Zoo thousands of letters addressed to Smokey pledging their support for his junior rangers program. The volume of letters was so great that the United States issued Smokey Bear his own ZIP code — an honor bestowed only to him and the President of the United States. Although Smokey Bear the Zoo resident died in 1976, the character lives on through the campaign. His message — “Only You Can Prevent Wildfires” — is as relevant today as it was 75 years ago.

Photo 3: A 1984 poster features Smokey Bear the character and part of his famous catchphrase, “Only You Can Prevent Forest Fires.” Following a series of devastating wildfires in 2001, this slogan was changed to “Only You Can Prevent Wildfires.” Credit: Special Collections/USDA National Agricultural Library 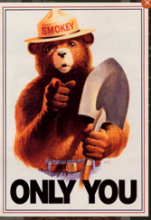