The Cheetah Conservation Station at the Smithsonian’s National Zoo is celebrating a baby boom of critically endangered dama gazelles. The Zoo announced the birth of the first calf, a male born to 10-year-old female Adara, Sept. 7. The second calf, a female, was born overnight Sept. 16 to 8-year-old Fahima. The third and final calf, a male, was born Sept. 18 to 7-year-old female Zafirah. All three calves were sired by the Zoo’s 3-year-old male, Edem.

Keepers are closely monitoring the calves, who appear to be healthy, nursing regularly and growing and behaving normally. For the next several weeks, the calves will remain in a quiet, off-exhibit area where they can bond with their mothers and acclimate to the habitat. They will make their public debut in mid-to-late October, weather permitting. Visitors can see Edem at the Cheetah Conservation Station in the morning before 10 a.m. The Zoo will provide updates on the calves on Facebook, Instagram and Twitter.

In this photo: Two critically endangered dama gazelles, a female and male, were born Sept. 16 and 18, respectively, to mothers Fahima and Zafirah. 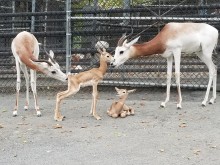