Twelve whooping cranes, one of the most endangered species of crane in the world, moved to the Smithsonian Conservation Biology Institute (SCBI) in Front Royal, Virginia, Dec. 16, 2018. It is the first time the facility has been home to whooping cranes. With less than 900 birds on the planet, the six mated-pairs will be the founding members of SCBI’s whooping crane research and breeding program. The chicks that the pairs hatch will be candidates for reintroduction to the wild.

Through their research, SCBI scientists have identified the components of a habitat that are necessary for whooping cranes in human care to successfully breed and raise chicks. They will also continue to study whooping crane hormones through blood and fecal samples to determine how they affect the birds’ ability to lay fertile eggs. Those data combined with ultrasounds will help scientists understand the relationship between hormones and how follicles in the ovary develop.

Finally, scientists will also research more effective methods to cryopreserve (freeze) whooping crane semen, which has proved challenging. If scientists can freeze semen, then it could be used to inject genetic diversity in the whooping crane population decades from now. That may be especially useful in the future since only 52 of the 163 whooping cranes living in human care are consistently laying eggs.

Scientists have conducted a number of studies in the past to examine management approaches to increase captive reproduction in North American whooping crane populations.By 1941, only 16 or fewer individuals of this species remained in Texas’ Aransas–Wood Buffalo population, which is the source of all whooping cranes alive today. Through a combined in situ and ex situ conservation strategy, as well as legal protection under the Endangered Species Act and the Canadian Species at Risk Act, the total population has grown to approximately 600 birds, of which approximately 25 percent reside in captivity. Threats to this species continue to be significant and include habitat conversion and loss, collisions with power lines and wind turbines, illegal hunting and human disturbance in critical habitat areas.

Ex situ conservation breeding has been a major part of efforts to recover whooping cranes. The captive population was established beginning in the late 1960s. However, this population is plagued by numerous reproductive problems including low number of eggs laid, low natural fertility, and delayed onset of egg laying in young females. CSS researchers are working to understand the impact of housing on reproductive hormones, behavior and success.

The study included eight established breeding pairs with lower-than-expected egg production. Four pairs were housed in normal dry pens, while the other four were moved to renovated, wetland pens. Through behavioral recordings and noninvasive hormone monitoring, researchers examined the effect of captive environment on reproductive function. Additional studies include the effect of captive management on egg fertility and the establishment of cryopreservation protocols for use in the whooping crane.

The Whooping Crane Breeding Facility and research program were made possible by the Volgenau Foundation and an anonymous donor.

Funding for past projects includes the Morris Animal Foundation, the Cosmos Club, United States Geological Survey and the University of Maryland-Animal and Avian Science Department. 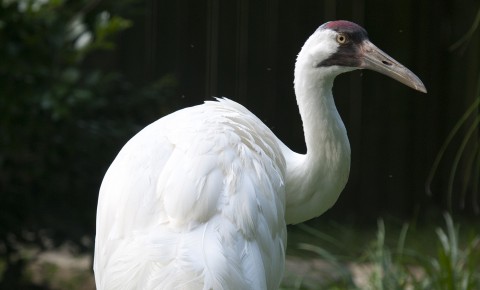