Smithsonian Migratory Bird Center and Smithsonian's National Zoo scientists track black-crowned night herons in order to unravel the mystery of where these birds spend the winter. Every spring, approximately 100 breeding pairs arrive at the Zoo in Washington, D.C., where they have been nesting since before the Zoo was established in 1889. Yet, where the birds go after they leave in the fall remains a mystery.

The black-crowned night heron tracking project is also an example of how scientists at SMBC are pushing the limits of new animal tracking technology to understand and conserve migratory birds. The greatest challenge to tracking migratory animals is reducing the size of transmitters while increasing the accuracy of locations. Often, a tradeoff exists between the weight of a transmitter and its battery life, accuracy, number of locations it records and how the researcher receives the data.

Both types transmit locations to satellites passing overhead, which are then relayed to a receiving and processing center where the data is processed to provide the coordinates of the birds’ locations. This process allows researchers to track the black-crowned night herons in almost real-time.

In 2015, for the first time, SMBC scientists deployed solar-powered GPS-GSM (Global System for Mobile Communications), or cell phone transmitters, on the herons. Cell phone transmitters collect the GPS location of a bird every hour and transmit locations via the cellular network every few days.

Herons are most active at dawn and dusk, so it was a mystery to see if the solar-powered battery would remain at high enough power levels to collect and transmit their locations. Additionally, issues with the coverage of the cellular network or weak signals (“Can you hear me now?”) in some areas can prevent the data from being transmitted.

At the Smithsonian's National Zoo, black-crowned night herons are lured into flight pens where they are weighed, banded with a unique identifying United States Geological Survey bird band and color band, and receive a satellite transmitter. The transmitter is attached to the back of the bird with a harness, as if the bird is wearing a backpack. Following animal safety and welfare guidelines, the transmitter weighs less than 3 percent of the bird's weight. After attaching the transmitter and checking for proper fit, the bird is released.

Over the last five years, the scientists have color-banded 16 adult and seven juvenile herons and attached transmitters to 16 adults (10 satellite transmitters and six cell phone transmitters). The researchers have tracked herons throughout the D.C. metropolitan region, as well as to North Carolina, Florida and Cuba. 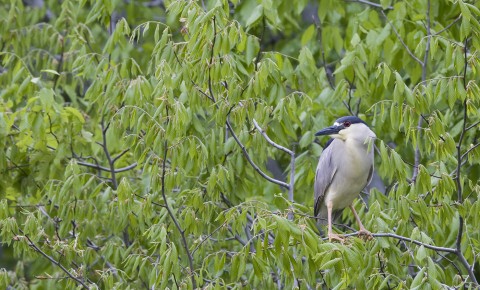