How You Can Help Migratory Birds

Tiny, pugnacious, jewel-like hummingbirds are relatively easy to attract to a garden and fun to have around. A careful look at hummingbirds provides a window into the elegance of adaptation in the natural world. 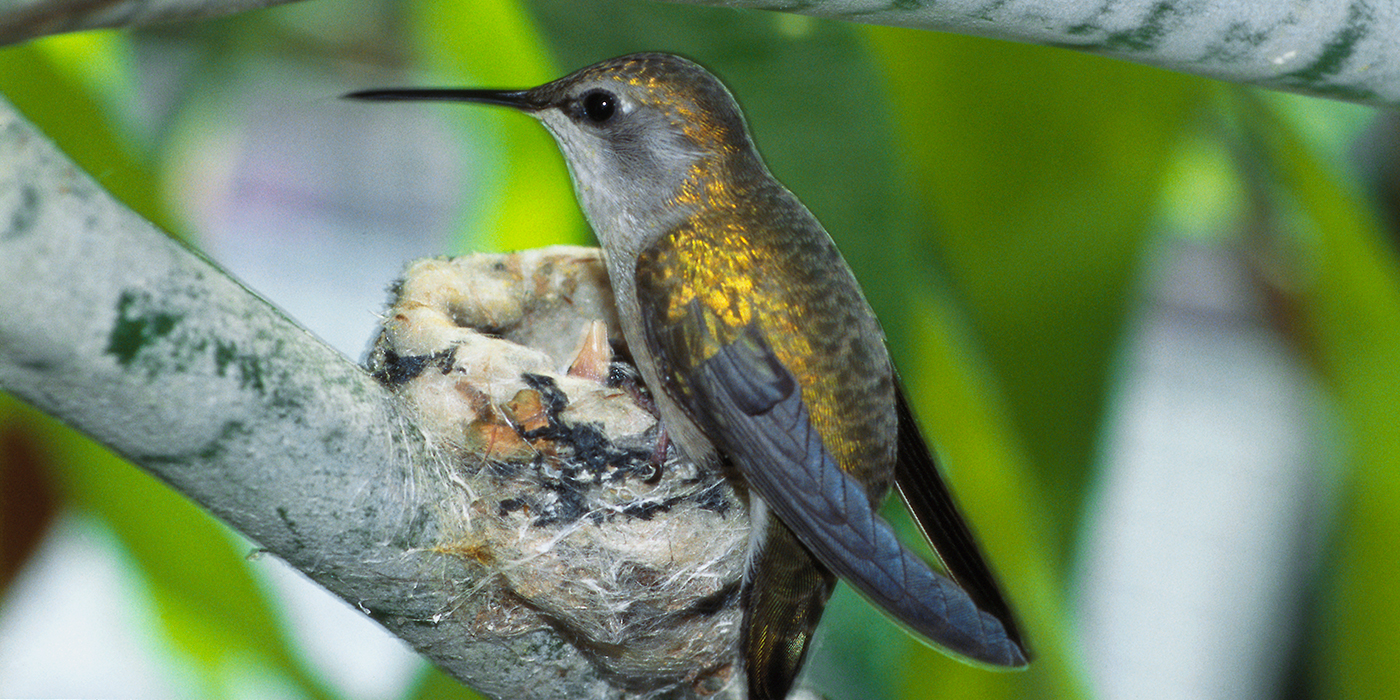 What is a hummingbird?

Hummingbirds belong to the avian family Trochilidae, and their closest relatives are the equally fascinating swifts. Hummingbirds are small (weighing 2 to 20 grams), with long, narrow bills and small, saber-like wings.

Males (and occasionally females) often have a colorful gorget—small, stiff, highly reflective, colored feathers on the throat and upper chest. These shiny feathers and others around the head may look sooty black until a hummingbird turns its head to catch the sun and display the intense, metallic spectral color.

The bee hummingbird of Cuba weighs only 1.95 grams, which means that, theoretically, 16 could be mailed first-class using just one stamp. The calliope hummingbird, the fourth-smallest bird, weighs in at a whopping 2.5 grams (less than an ounce) and can be found in the mountains of western North America.

It makes sense that the smallest birds come from the smallest eggs ... but how small? The one to two eggs in a ruby-throated hummingbird clutch are about as tiny as peas and are placed in a walnut shell-sized cup woven from spider webs and plant material.

Hummingbirds and swifts are able to stroke with power both on the down- and up-beat of a wing flap. Their power and small size allow tremendous agility in flight. In fact, hummingbirds are the only vertebrates capable of sustained hovering (staying in one place during flight), and they can fly backward and upside-down as well.

To their maneuverability, hummingbirds add speed and stamina. They have been clocked at close to 30 mph indirect flight and more than 45 mph during courtship dives. Migratory ruby-throated hummingbirds have no problem flying 18 to 20 straight hours to cross the Gulf of Mexico, powered by their fat stores and given a bit of help from winds.

Life in the Fast Lane

Asleep on the Job

Hummingbirds are one of the few groups of birds that are known to go into torpor. Torpor is a very deep, sleep-like state in which metabolic functions are slowed to a minimum and a very low body temperature is maintained. If torpor lasted for long periods, we would call it hibernation, but hummingbirds can go into torpor any night of the year when temperature and food conditions demand it.

Hummingbirds are the masters of torpor, because they have to be. Their feathers offer poor insulation, and they have incredibly high metabolic demands. Torpor allows them to check-out physiologically when they cannot maintain their normal 105 degrees Fahrenheit body temperature. 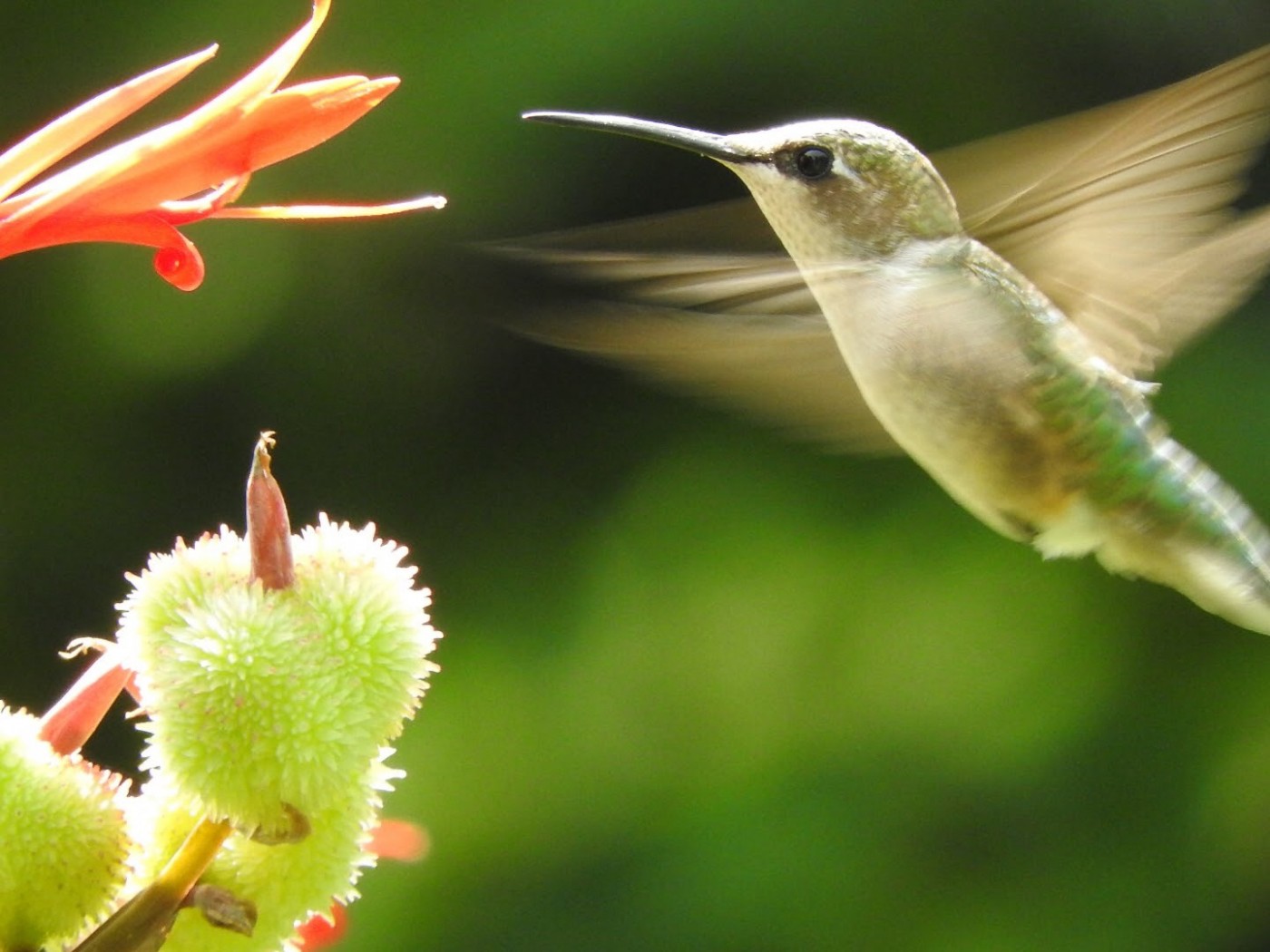 Where Do Hummingbirds Live?

The almost 340 species of hummingbirds are entirely restricted to the New World, where they can be found from Tierra Del Fuego to southern Alaska and from below sea level deserts to steamy tropical forests at elevations of up to 16,000 feet in the Andes of South America.

Most species live in the tropics, and while 17 species regularly nest in the United States, many of these are found close to the Mexican border. Most areas in the U.S. have one or two breeding species, and only the ruby-throated hummingbird nests east of the Mississippi.

The Relentless Demand for Food

Their high-energy lifestyle compels hummingbirds to locate reliable food resources. Feeding on flowers puts hummingbirds at the mercy of the flowering seasons of the plants upon which they depend. Hummingbirds solve this by being very mobile, and their movements are often shaped by the changing pattern of flower production over time.

In the western U.S., hummingbirds migrate through the lowlands in the spring and return by way of the mountains in the summer to track the intense blooming of annual plants in meadows—moving ever-higher up the mountain as the summer progresses.

Hummingbirds don't always depend entirely on flowers. During the breeding season, in particular, hummingbirds hover mid-air and catch small flying insects to eat and feed to their nestlings.

The Not-so-social Life of Hummingbirds

Hummingbirds are, for the most part, unsociable. In fact, the adjectives pugnacious and feisty are often appropriate. When more than one hummingbird is around, it is often a scene of repeated high-speed chases. In fact, male and female hummingbirds do not form a pair-bond after mating, and the female is left to care for eggs and chicks alone.

Hummingbirds do not need the help of other hummingbirds to locate food or fend off predators. Other hummingbirds are competitors for the flower nectar upon which they thrive. The help that a male might provide a female does not outweigh the burden of having a male around competing for food.

What is all this fighting about? Plants take time to secrete nectar into their flowers. In an ideal world, hummingbirds should time their visits to flowers to take advantage of a full load of nectar. But they wait to feed at a flower at the risk of other hummingbirds beating them to the punch. It is therefore worth the effort for hummingbirds to chase away competitors, so they have access and control of their favorite flowers.

In many cases, hummingbirds defend small territories around a favorite flower patch, and do so even during brief stopovers for refueling during migration. Where many species live together, the large species attempt to dominate flowers to get the biggest drinks of nectar, and smaller species try to sneak in for a few sips.

About the closest hummingbirds come to being social is in the tropics. The males of a small number of species form leks, places where they gather for months at a time and sing their scratchy hummingbird songs in an effort to attract females. The females are attracted to the leks, and the males then compete for the opportunity to mate.

The Whys and Whats of Hummingbird Flowers

Why do flowers attract special pollinators?

To be evolutionarily successful, flowering plants usually need their pollen carried from the stamens of one flower to the pistil of another so pollination occurs. This is accomplished in myriad ways. Some plants broadcast copious clouds of pollen that is carried by the wind to settle on cars, front porches and occasionally on a plant of the same species.

Many other plants produce few pollen grains and attract specific kinds of animals. By providing a nectar reward in a flower that keeps out a lot of animal competitors, there is a good chance the pollinating species will search out another like flower and pollination will occur.

What it takes for a flower to attract hummingbirds 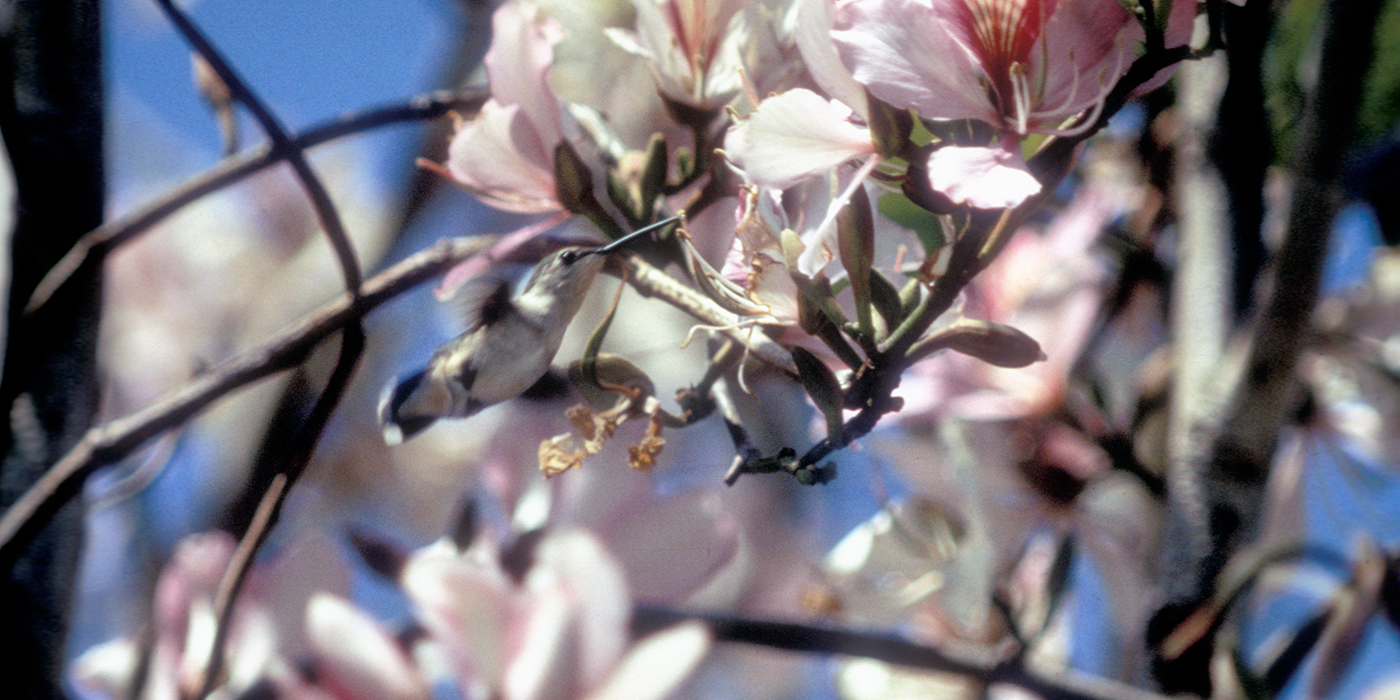 Most hummingbirds are not super specialized and will feed at a wide variety of flowers, preferring the hummingbird flowers described above. However, throughout the tropics are examples of very tight, co-evolved hummingbird-flower relationships in which the bill of the hummingbird fits the highly modified flowers almost like a key that opens a lock.

How Can You Help Hummingbirds?

Make Your Backyard a Hummingbird Restaurant 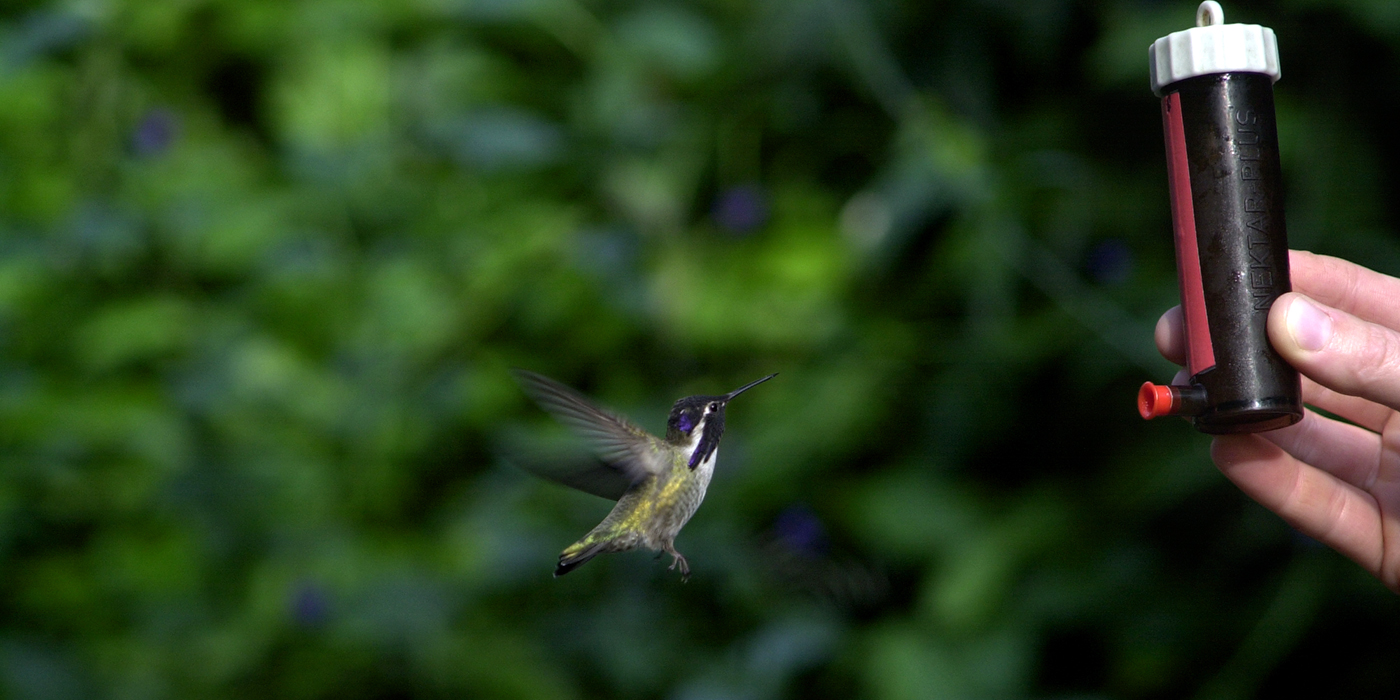 The life of a hummingbird consists of a relentless search for food. In areas settled by humans, the flowers that hummingbirds have evolved to hunt down and suck dry often disappear.

The good news is that the lost natural food sources can be easily replaced by planting the right plants and providing sugar water in hummingbird feeders.

Some good hummingbird plants include:

More than half of the species of hummingbirds live in the tropics. Even favorite backyard species migrate to the tropics, where they spend the greatest portion of the year. In the tropics, hummingbirds often move up and down mountains and between arid and moist habitats to keep up with where the trees and shrubs are flowering.

Coffee is often grown halfway up tropical mountains, the crossroads for the variety of species traveling to find flowers. When grown under a diverse canopy of shade trees, coffee plants, the trees that shade them and the plants that grow on the trees provide a smorgasbord of flower resources.

It is no wonder that shaded coffee farms can support impressive numbers of hummingbird species. In one coffee-growing region in Peru, Smithsonian Migratory Bird Center scientists recorded 24 species over the course of a year. Ruby-throated hummingbirds are also abundant in coffee farms in Mexico and Central America during their time in the tropics.

By drinking certified Bird Friendly® coffee, you help guarantee that coffee is grown on farms that feature the flowers that hummingbirds depend upon.