Development of a Pregnancy Detection Assay for Threatened and Endangered Felids

Center for Species Survival (CSS) scientists are working to save threatened and endangered felids by developing a noninvasive pregnancy test.

Pregnancy diagnosis is a key element in the management of small populations of threatened and endangered species. Every offspring is critical, so knowing if a female is pregnant can aid in proper mobilization of resources and expertise to ensure a successful birth and healthy offspring. Likewise, it is imperative to generate new information on mechanisms involved in establishing and maintaining pregnancy in these species.

CSS researchers utilize a proteomic approach to identify potential biomarkers to diagnose pregnancy in multiple felid species of conservation importance--the cheetah (Acinonyx jubatus) and clouded leopard (Neofelis nebulosa), as well as their domestic model (Felis catus). Both of these threatened species present significant breeding management challenges that would benefit from a means to routinely diagnose pregnancy.

A frustrating mechanism felids have in common is the occurrence of pseudopregnancy, a condition that results after mating with no offspring produced. During a pseudopregnancy, the female experiences a non-pregnant luteal phase that cannot be reliably distinguished from pregnancy using traditional diagnostic tests (i.e., hormone immunoassays). Due to the stress and danger of handling many wild carnivore species, we utilize a non-invasive approach to detect pregnancy biomarkers in feces.

Results will serve as a much-needed first step toward the development of a practical and reliable detection assay that institutions can use to quickly and non-invasively diagnose pregnancy and, therefore, increase the efficiency of captive reproduction for these charismatic carnivores. 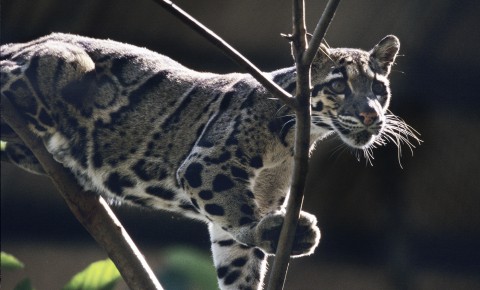