Once distributed across most of North Africa, scimitar-horned oryx (Oryx dammah) are currently considered extinct in the wild due to a combination of widespread overhunting, habitat loss and persistent drought.

A number of organizations make up the The Chad Oryx Reintroduction Project, including the Environmental Agency - Abu Dhabi, the Sahara Conservation Fund, the Zoological Society of London and the Smithsonian Conservation Biology Institute's Conservation Ecology Center (CEC). These groups work collaboratively with the government of Chad and the international zoo community to return oryx to the Ouadi Rimé-Ouadi Achim Game Reserve, a former stronghold of the species and one of the largest terrestrial protected areas in the world.

The first release, consisting of 23 individuals bred in captivity, began in 2016. Led by Melissa Songer, Jared Stabach, Katherine Mertes and Peter Leimgruber, CEC scientists will monitor the release of every animal via satellite tracking collars.  The tracking collars will provide data on oryx movements and survival, as well as a means for tracking and monitoring individuals on the ground through radio telemetry.

The reintroduction field site is located in central Chad. The area is sparsely vegetated with few large trees. Grasses flourish during the wet season on fine sandy soil where vehicle tracks are clearly visible. The research camp is fenced. All grass within the enclosure has been meticulously removed by our staff to reduce areas for snakes, scorpions, and other poisonous animals to take refuge. The area is continually maintained. The enclosure consists of modified shipping containers which provide sleeping quarters for staff, a kitchen, an office for research staff, and storage areas for equipment. All are arranged in a U-shape pattern. Two vinyl water bladders, set into the earth, hold nearly 500,000 litres of water, enough water to sustain oryx and staff for an entire year. Two open-air platforms, complete with grass roofs, provide shelter from the sun and the occasional rain shower. A 4x4 vehicle, parked within the enclosure provides suitable transport to neighboring villages for supplies and a means to monitor scimitar-horned oryx as they move broadly across the landscape. 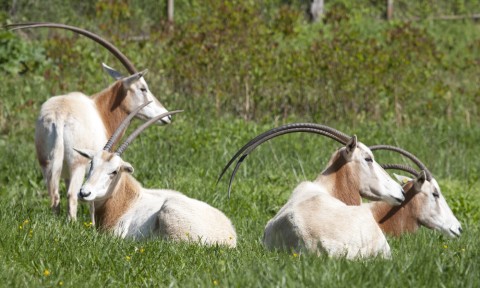