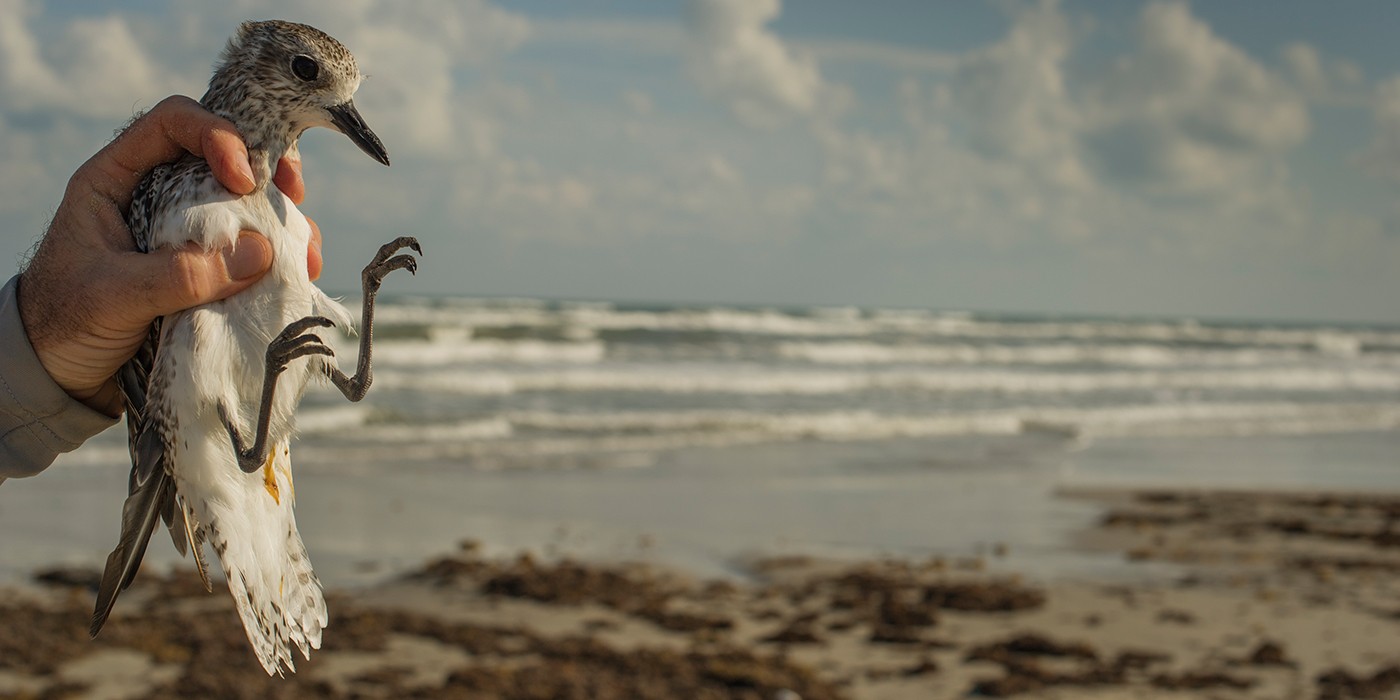 The black-bellied plover is a large shorebird with a short neck and a distinctive black belly and face. It weighs between 5.6 and 9.8 ounces (160 and 277 grams), has a wingspan of about 2 feet (60 centimeters) and is about 11 inches (28 centimeters) in length. This species is remarkable for its amazing migrations. The North American population breeds in the high Arctic and spends its winters on the coasts of southern Canada, the United States, Mexico, and Cental and South America.

Black-bellied plovers are also known for being cautious and screaming out loud alarm calls that warn the bird community of danger. Because these plovers are so alert, their populations were not heavily impacted by the hunting of shorebirds in the late 1800s and early 1900s, which wiped out many other shorebird populations.

North American black-bellied plovers spend their summer breeding seasons in the Arctic tundra of Canada and Alaska. This region is covered with ice and snow much of the year. There is also a frozen layer of soil and dead plant matter, called permafrost, which lies just below the surface of the ground. Because of these harsh conditions, there are very few trees where the plovers breed. The land is covered with a carpet of low vegetation and lichen.

Large shallow pools of water develop on the ground every summer as the surface ice and snow melts. This standing water is an excellent place for insects to breed, and summer skies are filled with giant swarms of insects. These insects are an important part of the plover diet and provide the protein they need to raise their young.

Black-bellied plovers build their nests on the ground by scraping a shallow hole into the ground and filling it with pebbles and soft lichens. They usually lay four eggs in the nest, and parents take turns incubating the eggs while the other parent hunts for insects. The eggs hatch in just under a month, with the young nestlings covered with soft, downy feathers. Within a day of hatching, the chicks are able to hunt by themselves on the ground around the nest.

The parents care for and protect their young from predators for the first few weeks after the young hatch. The female parent leaves the nest site after two weeks. In a little more than a month, the adult male also leaves the nest site, and the chicks are able to fly. The young plovers and the adults spend the remainder of the season putting on weight to prepare for their migration, gaining as much as one-third to one-half of their body weight to make the long journey.

Black-bellied plovers leave their wintering grounds in late April, arrive at their breeding grounds in May and June, and begin their fall migration in late July. It is believed that individuals travel the same route during their spring and fall migrations.

Black-bellied plovers use a wide variety of routes and strategies during migration. They fly above both water and land while migrating. They tend to cover short distances over land, but they often travel very long distances over water.

Some birds use stopover sites, which are areas where they stop to eat and rest. One area where plovers are known to stop is along the Saint Lawrence River, which is an important stopover location for a wide variety of migratory birds in southern Quebec.

When traveling over water, plovers can fly incredibly far. Using satellite tracking data, a group of scientists working with the Canadian Wildlife Service observed one black-bellied plover that traveled from Newfoundland, Canada, all the way to the coast of Brazil in a single flight.

Black-bellied plovers spend their winters on temperate, tropical and subtropical coastlines across much of the world. North American populations tend to gather in flocks along sandy coastal beaches, tidal creeks and estuaries in North and South America. In the tropics and subtropics, they often roost at night in mangrove forests, which are an important habitat for many different species (Read more about mangroves here!).

Living on the coast provides a rich diet for plovers that is very different than their diet during the breeding season. Coastal plovers eat from a marine buffet of polychaetes (marine worms), bivalves (such as clams and mussels), snails, shrimp and crabs. They search for food mostly by sight and can be seen walking or running along the beach in search of their prey. The search for food intensifies in April, as they work hard to gain as much weight as possible for their migration back to the Arctic.

Check out the following resources to learn more about the black-bellied plover:

All About Birds: Black-bellied Plover