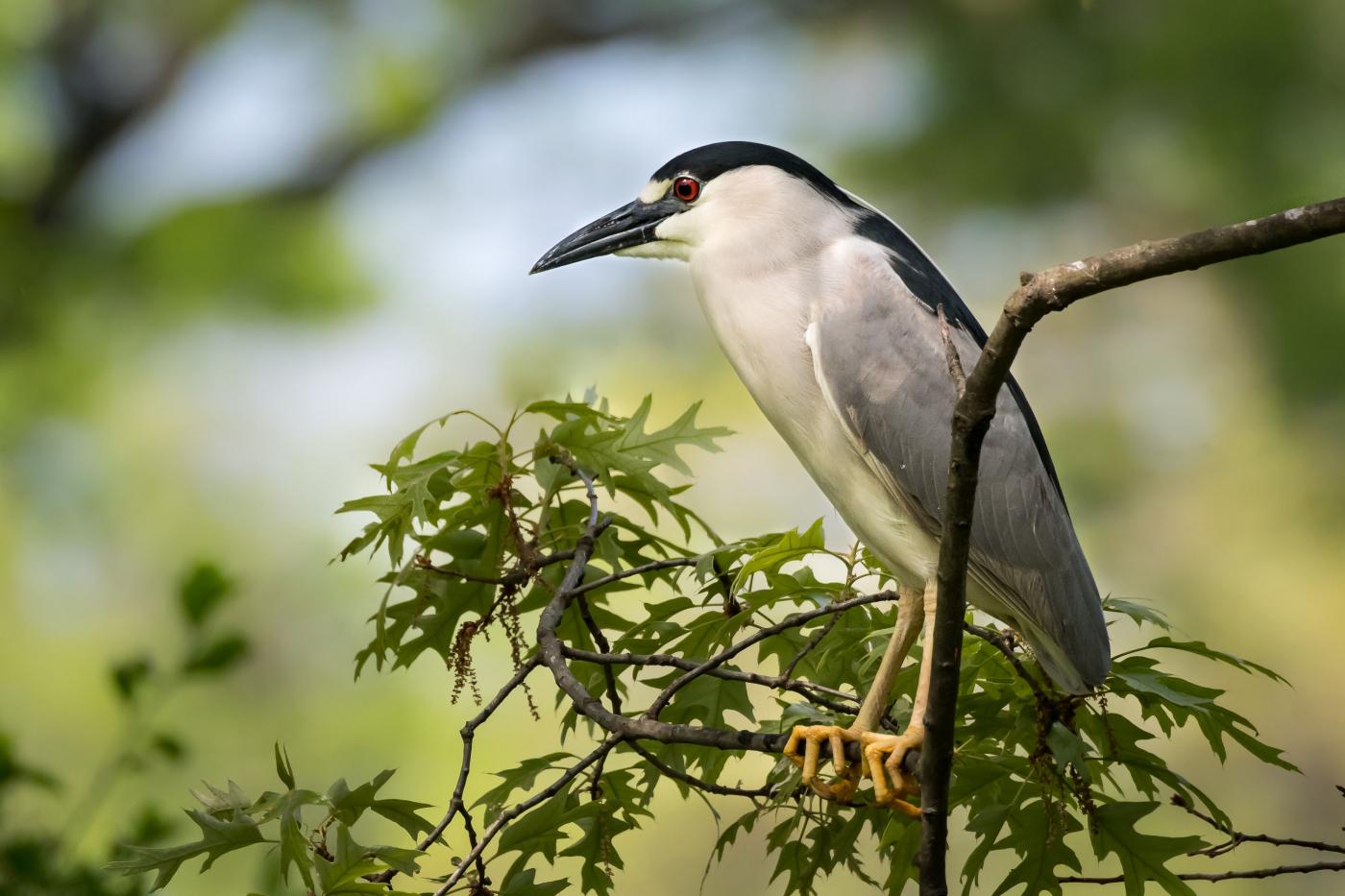 They are widespread throughout North America and live in a variety of habitats. In fact, they are the most widespread heron species in the world, breeding on every continent except Australia and Antarctica. Night herons are named for their habit of feeding between evening and early morning. They are opportunistic feeders with a diverse diet and will feed on fish, leeches, earthworms, insects, crayfish, clams, amphibians, lizards, snakes, turtles, rodents, birds, eggs and even garbage at landfills.

During the breeding season black-crowned night herons are found across North America but have larger populations on the coasts. The breeding habitat they choose needs to provide good tree cover for nesting and for shelter from predators. It must include a body of water, so they can forage for food. Their foraging grounds include swamps, streams, lakes, salt marshes, man-made ditches and wet agricultural fields.

Night herons nest in large colonies. Just one tree can have a dozen nests. The male selects a site to start building the nest and displays himself to attract a mate. After a female chooses her desired mate, the male begins to gather nesting material and presents it to the female. The female then uses the materials to complete the nest.

Female night herons lay about three to five eggs which are incubated by both parents for 24 to 26 days. For 10 days after they hatch, the chicks cannot control their body temperature and must be constantly kept warm by one of the parents. Both parents feed the chicks by placing partially digested food into their mouths. The young can climb out of the nest when they are 4 weeks old and begin flying at 5 weeks old. They follow their parents to learn how to forage for another few weeks before beginning to fly away from the nesting site.

Black-crowned night herons in the northern part of their range are typically migratory. Some populations in the southern U.S. are not known to migrate or only migrate short distances. Southward migration begins in September or October and tends to follow either the coasts or the Mississippi river system. Migration typically occurs at night, with birds flying in small groups or alone.

Wintering range varies for different populations of night herons. Populations that breed in the eastern United States tend to overwinter along the southern Atlantic coast and Caribbean shores. Populations that breed in the western United States tend to winter in Mexico. The night heron’s wintering habitat is similar to its breeding habitat, because it is dependent on wetlands for foraging. Night herons roost in large groups that range in size from just fifty birds to thousands. Wintering birds begin to migrate northward to the breeding grounds by the end of March.

Black-crowned night herons are a common species, but their numbers have declined slightly from 1966 to 2014, according to the North American Breeding Bird Survey. They are affected by a number of threats across their annual cycle, including wetland loss and water pollution. In the U.S., more than 50 percent of the wetland habitat that these birds rely on has been lost, mostly due to human development and agriculture. They are also affected by the level of pollutants in the waters that they forage for food in. Sources of water pollution include pesticides and fertilizers used on farms and chemicals from industrial plants.

Check out the following resources to learn even more about the black-crowned night heron:

All About Birds: Black-crowned Night Heron