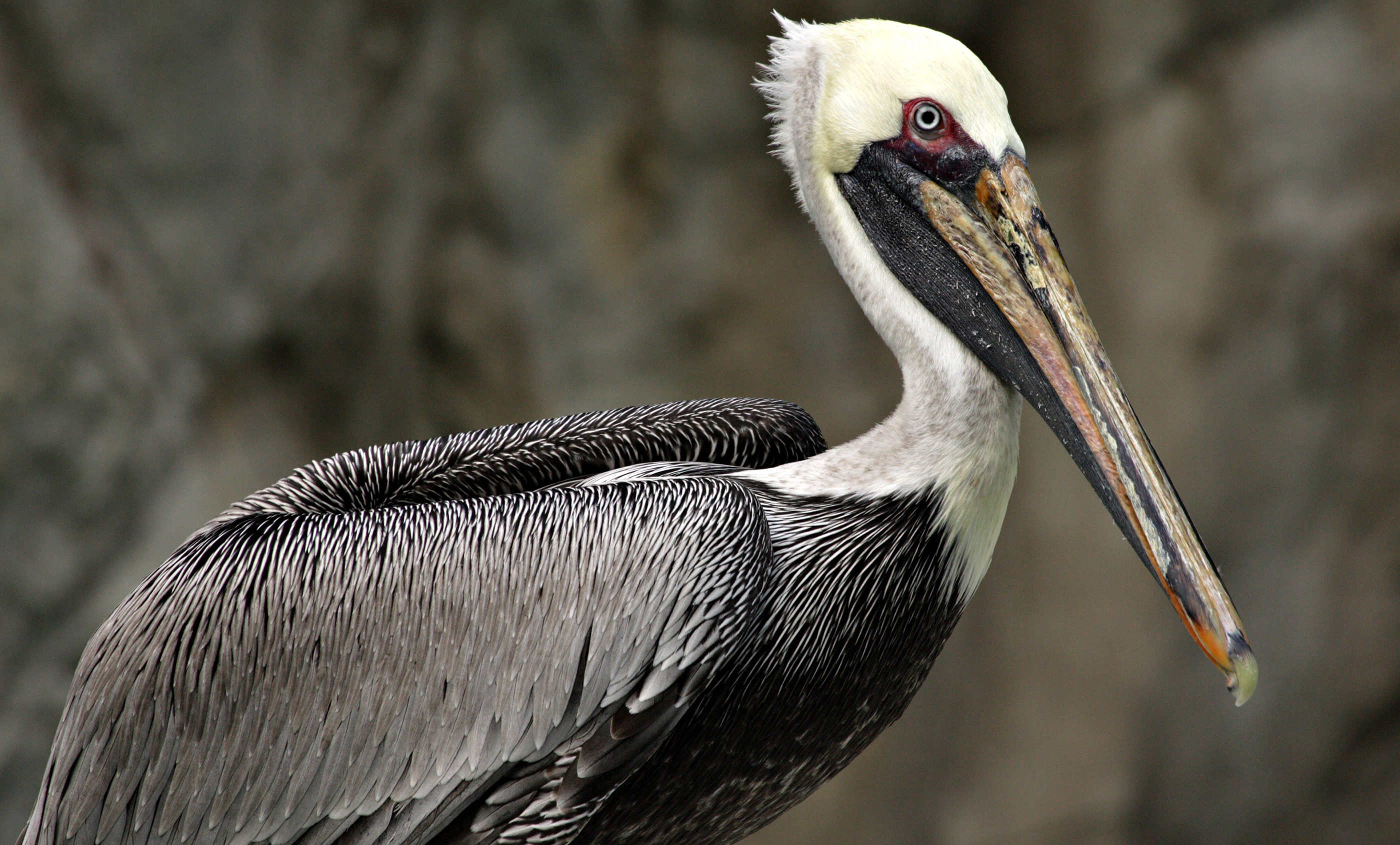 The brown pelican is a large, unique bird that lives on shorelines and small islands in colonies with thousands of individuals. This species is common along coastlines of the southern and western United States, the Caribbean, and parts of Mexico, Central America and northern South America.

Brown pelicans have a wingspan of about 6.5 feet (2 meters) and weigh up to 11 pounds (5 kilograms). These comical-looking pelicans are graceful in flight and can be seen flying in groups just above the water’s surface or drying out their feathers on a post by the water’s edge.

Brown pelicans make incredible headfirst plunges into the water to hunt fish that they catch in a deep pouch located under their bill. If their hunt is successful, they carry the prey away in their pouch, let the water drain out for a few minutes, then tilt their head back and swallow the fish whole.

The 20th century was a tough time to be a pelican. At the turn of the century, it became fashionable to decorate women's hats and jackets with bird feathers, and thousands of pelicans were killed for this purpose. During World War I, pelicans were shot by fisherman who blamed them for reducing fish resources. Luckily, the practice of intentionally killing migratory birds became illegal in 1918 with the passage of the Migratory Bird Treaty Act. In the mid- and late-1900s, a pesticide called DDT that was used to control mosquitoes had an unintentional effect that almost drove brown pelicans to extinction. DDT caused pelican eggshells to be very thin. This led to low rates of nest success, and populations of pelicans, as well as many other species, were wiped out.

Luckily, steps were taken to preserve this species, and the brown pelican now represents a major conservation success story. In 1970, the United States government listed the brown pelican as a protected endangered species. This status protects the pelican from being directly or indirectly impacted by humans. In 1972, the United States Environmental Protection Agency banned the use of DDT. Since that time, populations of pelicans have recovered and expanded. The recovery has been so successful that brown pelicans were taken off the endangered species list in 2009.

Unlike other birds that we are studying in these lessons, the brown pelican’s breeding season is not exclusively during late spring or summer. The time of year that a pelican breeds depends on where it lives or, more specifically, on its latitude, which is the distance of a location from the Earth’s equator.

At latitudes between the equator (0 degrees) and about 20 degrees, pelicans experience little change in temperature across the year. Pelican breeding in these locations is dependent on food supply. At latitudes between 20 and 30 degrees, pelicans breed in the winter and early spring, when temperatures are moderate and there is plenty of food available. Above 30 degrees latitude, pelican breeding occurs between April and September to avoid the freezing winter temperatures.

Breeding begins when the male pelican chooses a nest site. He then begins a courtship dance to advertise to a potential mate. When a female chooses him, they will begin to build a nest together, with the female doing most of the construction and the male bringing sticks.

The female lays a clutch of two to four eggs in the nest. Both parents take turns sitting on the eggs to incubate them. Brown pelicans hatch without feathers and are helpless without their parents’ care. At least one parent stays with the young at all times for the first month to month-and-a-half.

The parents take turns feeding the young, initially by regurgitating small and well-digested fish onto the floor of the nest for the young, or nestlings, to eat. As the nestlings grow, they begin feeding on whole fish by reaching their heads into the pouch under the parent’s bill. The length of time that the young pelicans stay in the nest varies with latitude, but they generally leave the nest within two to three months.

Most members of a brown pelican colony spend the winter in the same location that they breed. Their diets and behaviors during the breeding period are also similar to those in the nonbreeding period.

While most brown pelicans are resident birds, meaning they stay in the same area all year long, some migrate. This raises a mysterious question—why would some members of a colony migrate while others do not?

Using new tracking technology, scientists have started studying the movement of migratory and resident brown pelicans. Juliet Lamb, a scientist who researches brown pelicans, used satellite tracking data to study their movements in the Gulf of Mexico. She found that pelican colonies can be made up of residents, short-distance migrants and long-distance migrants. Comparing her tracking data with measurement data, she found that smaller birds and individuals from larger colonies are more likely to migrate.

As we continue to use tracking technology in different regions and on more brown pelicans, we will gain a greater understanding of this species. In the summer of 2017, Smithsonian Migratory Bird Center scientist Autumn-Lynn Harrison attached satellite tags to a colony of brown pelicans in the Chesapeake Bay region. She hopes to use the tracking data she collects to better understand how these pelican populations are expanding, the timing of their migrations and the ecology of the Chesapeake Bay.

Despite the recovery of the brown pelican, humans still impact their populations in a number of ways. The primary threat that pelicans currently face is pollution. A pelican’s feathers provide some necessary waterproofing for these water-diving birds. Oil spills from offshore drilling operations and pipelines can cause their feathers to absorb water, which can lead to drowning or hypothermia.

It is estimated that 82,000 birds were killed in the 2010 Deepwater Horizon oil spill, including one out of every 10 brown pelicans in the Gulf of Mexico.

Plastic garbage is also a major threat to pelicans and other shorebirds. Plastics can take hundreds of years to decompose and have built up in the Earth's oceans (Learn about the great Pacific garbage patch.). The toxic chemicals in plastics can be harmful to birds, and birds can be strangled by strips of plastic. Birds also often mistake plastic items for food, and their stomachs can become so filled with plastic items that they die from starvation. A 2015 study found that nine out of every 10 seabirds have plastic in their stomachs. Limiting our use of plastic products whenever possible, and reusing and recycling any plastics we do use, can help fight this problem.

Check out the following resources to learn more about the brown pelican:

Autumn-Lynn Harrison's Expedition Blog: "Where Do You Go, Brown Pelican?"

All About Birds: Brown Pelican