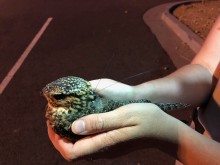 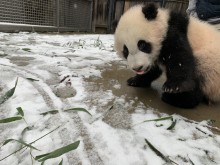 Jan. 29, 2021
#PandaStory: A Bear’s First Taste of Bamboo
Our little panda cub had a big week—from his livestream debut to his first taste of bamboo!

Jan. 22, 2021
#PandaStory: A Parcel of Sweet Potato for Xiao Qi Ji
Our sweet panda cub had his first taste of sweet potato. Spoiler alert: he gobbled it up.
Jan. 21, 2021
Sink Your Teeth into Cheetah Cubdate #16
The cheetah cubs' adult teeth are coming in, and carnivore keepers are documenting each development. Echo's 9-month-old cubs are SCBI's first litter of cheetahs to participate in this type of...

Jan. 15, 2021
#PandaStory: A Playful Panda Cub
Giant panda cub Xiao Qi Ji’s word of the week seems to be: play! Our 4.5-month-old cub’s interest in his surroundings really took off this week.
Jan. 12, 2021
How Ecologists are Using Sound to Detect an Elusive Bird
Cuckoos are extremely secretive birds and difficult to spot. Researchers are developing a tool, using remote sound recorders and artificial intelligence, to help detect them.

Jan. 08, 2021
Pouncing On Enrichment: Stories from Real-Life Zoo Guardians
Lions, tigers, cheetahs and bobcats – let’s play! Keepers Katy Juliano, Adri Kopp and Amber Dedrick know how to get the big cats they work with pouncing, roaring and purring for enrichment.
Jan. 08, 2021
New at the Zoo: Komodo Dragon
The Reptile Discovery Center team is warming up to a new monitor lizard this winter. The young Komodo dragon, named Onyx, moved into his new habitat Dec. 10.

Jan. 08, 2021
Keeping Up With the Kiwi
Bird keeper Wesley Bailey shares an update on the Smithsonian Conservation Biology Institute's success breding brown kiwi.
Jan. 08, 2021
#PandaStory: A Symbol of Inspiration and Hope
As the calendar turns to 2021, it is human nature to reflect on the moments that sparked inspiration in an otherwise challenging year. Giant panda cub Xiao Qi Ji gave many who follow his milestones a...

Jan. 07, 2021
How Tribes and Conservation Partners are Bringing Swift Foxes Back to Their Historic Range
In the midst of the pandemic, as the story goes, a team set out to bring swift foxes back to a land they had disappeared from more than 50 years ago. Learn more in this update from landscape...
Jan. 01, 2021
#PandaStory: Xiao Qi Ji vs. The Rock Wall
Giant panda cub Xiao Qi Ji continues to explore and take on new challenges—like climbing up rockwork in the indoor habitat he shares with mother Mei Xiang.
Dec. 31, 2020
How Do You Weigh a Gazelle?
Tracking an animal's weight is an important part of animal care, but gazelles are known to be flighty and nervous. So, how do keepers convince them to step onto a scale? Find out in this update from...
Dec. 28, 2020
8 Aww-Inspiring Videos of the Year’s Best Animal and Conservation Stories
From a litter of chirping cheetahs and the birth of a lovable giant panda cub to groundbreaking coral reef research and new strides in animal care, there were many milestones to celebrate this year.
Dec. 18, 2020
#PandaStory: A Feisty Xiao Qi Ji
This week, we saw the sassy side of our almost 4-month-old giant panda cub, Xiao Qi JI, as he let out a loud and feisty bark!

Dec. 07, 2020
Smithsonian’s National Zoo and Conservation Biology Institute Extends Giant Panda Agreement
Giant pandas, icons and ambassadors for the efforts to save the species in Washington, D.C., since 1972, will continue to live at the Smithsonian’s National Zoo through the end of 2023.
Dec. 04, 2020
A Look Back At Panda Cub Xiao Qi Ji's Exciting November
November was an exciting month for the Zoo's giant panda cub! He received a clean bill of health during his third veterinary exam, was named "Xiao Qi Ji" by his fans around the world and took his...
Dec. 04, 2020
It Takes a Colony: Stories from a Real-Life Zoo Guardian
Waddle along with Small Mammal House Curator and African Penguin Species Survival Plan coordinator, Steven J. Sarro, as he shares his experiences working with zoos and penguins!