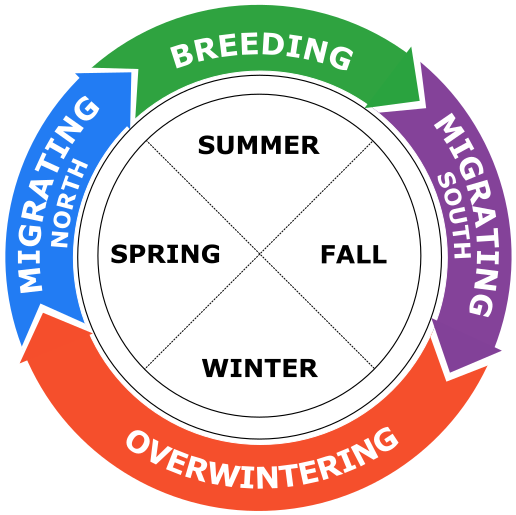 Many migratory birds make fantastic voyages each year. Migration describes the regular annual movements that some animals make between regions where they breed and locations where they spend the rest of the year.

Not all birds migrate, but those that do often go on challenging journeys that stretch hundreds or even thousands of miles between their summer breeding grounds and their wintering grounds. These migrations likely evolved to ensure that birds have a steady food supply throughout the year and avoid harsh climates. Migrations are also one of nature's most remarkable phenomena.

By the late 1900s, scientists were increasingly alarmed by the fast decline in migratory bird populations. Today, more than half of all North American bird species are at risk of extinction, unless we take significant conservation actions (State of North America's Birds 2016).

Scientists and conservationists know that human activities, especially those that affect bird habitats, are the main cause of this decline. But because animals that migrate use many different kinds of habitats throughout their lives, determining what can be done to save these species can be challenging. To understand the impacts that humans have on migratory birds, we need to learn how birds interact with their environment during each part of their full annual cycle. The full annual cycle describes birds throughout their breeding, migration and overwintering periods.

Individuals and populations of migratory birds are geographically linked across the different phases of their annual cycles. This is known as migratory connectivity. For example, the migratory connectivity of an individual gray catbird may describe how it raises its young during the summer in Takoma Park, Maryland, migrates along the foothills of the Appalachian Mountains in the fall, spends its wintering period in Cuba, and then returns to Takoma Park the next year to breed. Migratory connectivity is important, because birds can be impacted at any part of their life cycle and at any location.

Studies of migratory birds have mostly focused on their summer breeding or wintering grounds. Because of this, it is rare that scientists are able to determine the migratory connectivity of individuals or populations. This makes it difficult to understand what is causing their decline and to develop measures to reduce human impacts.

New technological advances have allowed Smithsonian scientists to begin using tracking technology to observe the migratory connectivity of individual birds. Tracking involves attaching devices to birds and following their movements. By tracking birds, we can learn where they go, when they make their journeys and whether they survive from year to year.

Throughout the Follow That Bird! lessons, you will join Smithsonian scientists using state-of-the-art tracking technology to explore the lives of migratory birds.